1. No nation in history has ever imprisoned more of its own citizens than the United States of America.

3. Plea bargaining accounts for 95% of all convictions today rather than the constitutionally mandated trial by jury.  Coerced agreements are garnered by prosecutors through the use of illegal detention in Gulags.

4. Americans lose their rights as a result of having a "criminal record" and cannot vote, access government programs, or have a voice in their nation.

5. This permanent under-class with no voice now numbers 1 of every 4 U.S. citizens, according to the United States Department of Justice,

6. America's wealthiest corporations now have factories in federal prisons all over America and in the prisons of 37 states.  Inmates are used as modern slaves at wages below third world nations.

7. The U.S. Department of Justice estimates that 71 million Americans - approximately 25 percent of the population - have been disenfranchised.

8. The constitutional right to challenge illegal Imprisonment (known as habeas corpus), was unlawfully suspended by the US Congress in 1996.

9. The average American commits three "felonies" a day and does not even know it, as most of these 314,000 new laws with prison as penalty are so vague and obscure that one cannot know or suspect law is being broken.

10. The admitted "reversible" rate of error by US courts- even in death penalty cases- is 73%, with 9% actually (and knowingly) innocent when put on trial .

BY FORCING GOVERNMENT TO RETURN TO RULE OF LAW 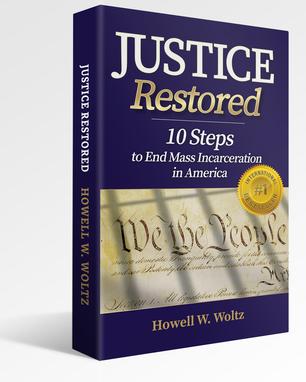